When I start learning any new technology, I want to get my hands drity as fast as possible, without spending too much time on environment setup. I wrote this post, to help you get started with Apache Kafka as fast as possible. In this post I cover full setup on Windows, but since it uses Docker, the process should be easily applicable for Linux/Mac machines. Besides Apache Kafka itself, the setup involves lauching Kafka-Manager UI (developed by Yahoo), so you will be able to manage your Kafka instance with ease. Let’s get started!

How to setup development environment for Apache Kafka + Kafka-Manager on Windows (using Docker).

The setup will contain two containers:

Those two describe to which hostname the Kafka server should respond from within the container.

Second container, kafka_manager runs newest (at the time of writing this post) kafka-manager tool. It needs to connect to the running Kafka server, that’s why there is the link entry in docker-compose:

Environment variable ZK_HOST also needs to be set in order to connect it to our Kafka server. We use hostname from kafkaserver container in order to achieve that.

Last thing in docker-compose file is network declaration, we use simple bridge networking there, so both containers can see one another.

Once the docker-compose.yml file is ready, open your favorite terminal in the folder which contains it and run:

After running this command, you can check status of the containers by invoking:

You should see output similar to this one:

Now when the Kafka server is up and running, we can create a Kafka Topic. Topic in the Apache Kafka terminology is an isolated fragment to which multiple applications/systems can send messages and from which multiple consumers can receive (subscribe) data. One Kafka server can have any number of topics. I would say that Kafka Topic is equivalent of Table in SQL databases. It’s a separate category, isolated from the rest of the system. 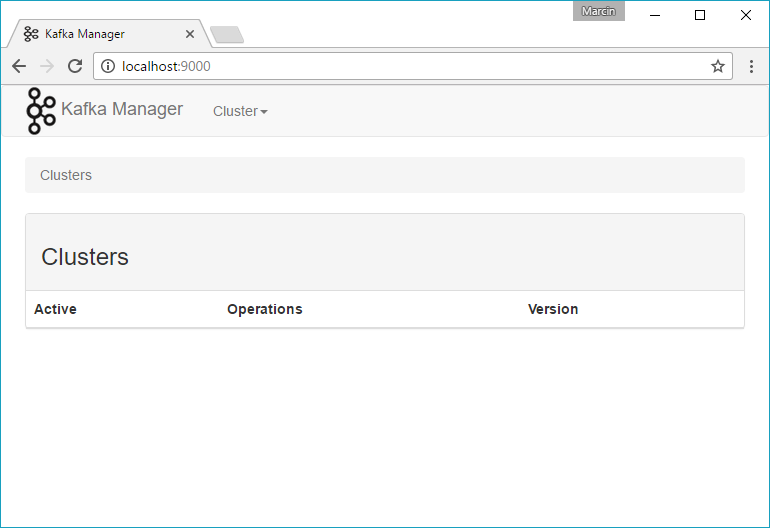 As you can see, there are no Clusters yet (since it’s still an empty environment). Cluster is where Kafka stores all the data pushed to the topics. Let’s create one by using the Cluster menu:

For the quick setup, you can enter only:

After entering those, click Save. You should be redirected to the homepage and see the cluster there: 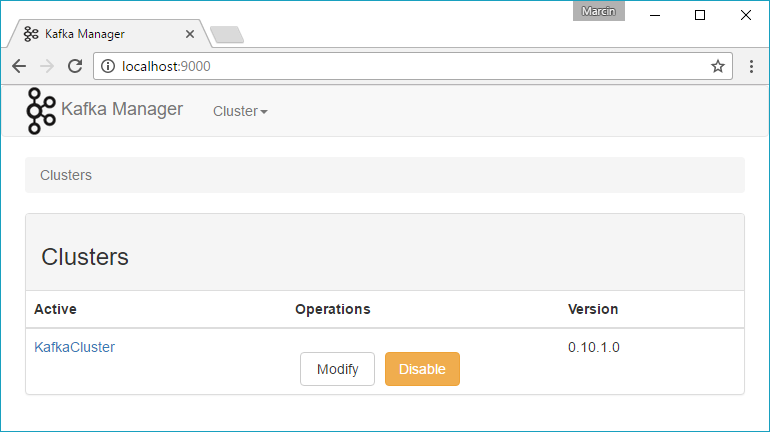 Now, when the cluster is present, navigate to it’s properties and open Create Topic from the menu: 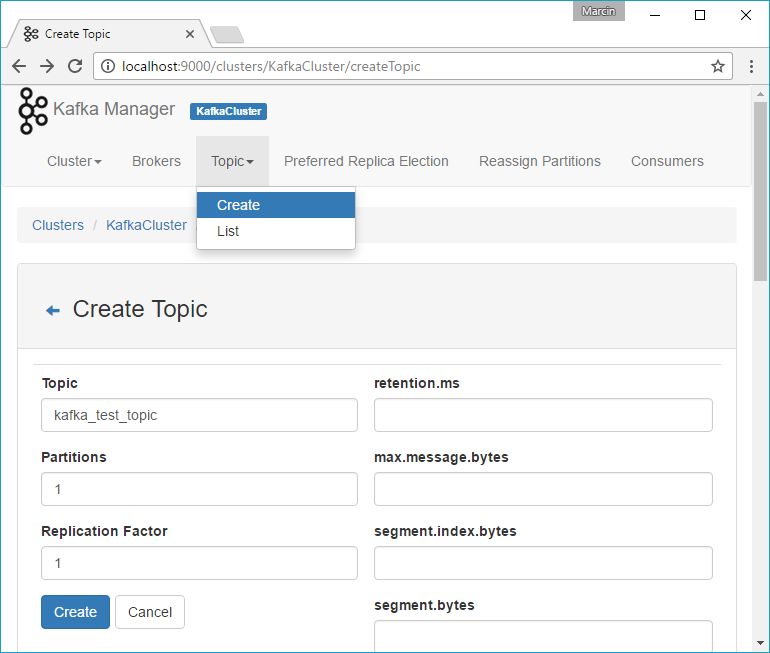 Entering only Topic name is enough. Just hit Create from there. Done! Topic is created!

It is done, environment is up and running. Let’s test it. The quickest way to do this is to use Apache-provided scripts and just launching two of them - one for the producer and one for the subscriber. In order to get those scripts, download the folowing file (it’s the actual Apache Kafka distribution, but we only need scripts from it):

and extract it. Then follow the path to the following folder:

We are interested in kafka-console-consumer.bat and kafka-console-producer.bat, but before launching them, we need one more thing. In order to connect to Kafka in Docker from the Windows host, we need to map Kafka container hostname to the localhost, by editing hosts file:

Type any message and hit ENTER, you should see the messages flowing, like this:

When the work is done, you can easily turn off running containers by invoking:

in the folder when you have your docker-compose.yml file:

Now you have Apache Kafka with Kafka-Manger development environment up and running on your Windows machine. I hope that this short post helped you with the setup. Please share or leave a comment if you liked it!