Apache Beam is a relatively new framework, which claims to deliver unified, parallel processing model for the data. Apache Beam with Google DataFlow can be used in various data processing scenarios like: ETLs (Extract Transform Load), data migrations and machine learning pipelines. This post explains how to run Apache Beam Python pipeline using Google DataFlow and then how to deploy this pipeline to App Engine in order to run it i.e on a daily basis using App Engine CRON service. There are some tutorials explaining how to create basic pipelines and how to run them using Apache Beam DataFlow Runner, but there is not much information how to deploy those pipelines to be runned without user interaction, which should be the first thing to do, since no one wants to trigger big data pipelines by hand.

As an example pipeline I will show wordcount on a few books of Shakespeare.

The idea behind wordcount pipeline in Apache Beam is simple - actually it’s almost the same as for MapReduce, but simpler in the implementation, because of the Apache Beam capabilities and expressiveness:

Here is python code for the pipeline described above. Comments and code explanation is below.

Besides the required imports, first important part is the run() method - it’s an entry point to the pipeline. Whan you can observe there is that it does not follow the Apache Beam documentation convention, where beam.Pipeline objects are wrapped inside the python with clause. I did it on purpose - thanks to that, the code will not wait for the pipeline to complete, but rather it will dispatch the job to Google DataFlow and return (see “DataflowRunner” in the constructor). Other configuration parameters are self-descriptive and they are required by the Beam SDK.

First, the pipeline reads all book files (link to those files is at the end of this post) from Google Cloud Storage - you need to create GCS bucket and put the input files into the folders in order to use them in the pipeline.

Count Words is a second step. It uses my implementation of beam.PTransform class, which can be used to join multiple transforms into single high-level piece. The implementation itself consists of 4 steps:

Format Output does only one simple thing - transforms each tuple in form (word, number of occurences) to readable string in format: my word: 123.

Last step is to Save results into file. For the case of running the pipeline multiple times, output folder will have current timestamp in the name.

Now when the pipeline is ready, we can prepare python web application which will trigger DataFlow jobs. For this task, I will use Flask framework.

Start with creating the project structure: 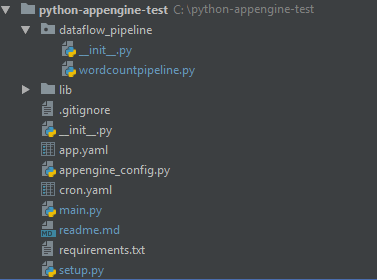 Description of the structure:

What is really important in the requirements.txt file. For my pipeline, it’s contents are:

In order to make the App Engine application to work, all of the required packages are needed to be deployed with the application, that’s why you need to install them locally by invoking:

Also note that apache-beam package is used with [gcp] feature, which will install the capabilities of running the pipeline in DataFlow.

Configuration file for the application looks like this: app.yaml

The file describes that we want to use App Engine Flex environment, with python 2.7 runtime.

IMPORTANT: Apache Beam pipelines will not work on App Engine Standard environment, due to some filestystem I/O operations. You will most likely encounter this exception there:

The solution is just to use Flex environment.

Here is the implementation of Flask application with single endpoint: /start-dataflow.

From the code above, the most important part is the def start_dataflow() function. It checks for the presence of X-Appengine-Cron HTTP request header. Thanks to that, the app can know, whether the request came from App Engine CRON service or just from external call. For the debugging purposes, you can comment out this part, but remember to NOT DEPLOY application without this check, because then, any user will be able to trigger your pipeline and potentially increase your billing a lot!

After asserting the presence of HTTP header, Apache Beam pipeline is spawned by calling run() method which was defined in our pipeline above. If everything goes fine, web application will return status code 200. If something will go wrong, you will get status code 500 with stacktrace, which you can use to hunt down the issue.

Last thing to do is to define cron.yaml file with CRON job description:

It’s a simple file, which will send GET request to /start-dataflow endpoint every 30 minutes. Of course you can modify the schedule as needed.

Note that for large pipelines with lots of external libraries, deploying App Engine Flex environment application might take a while. 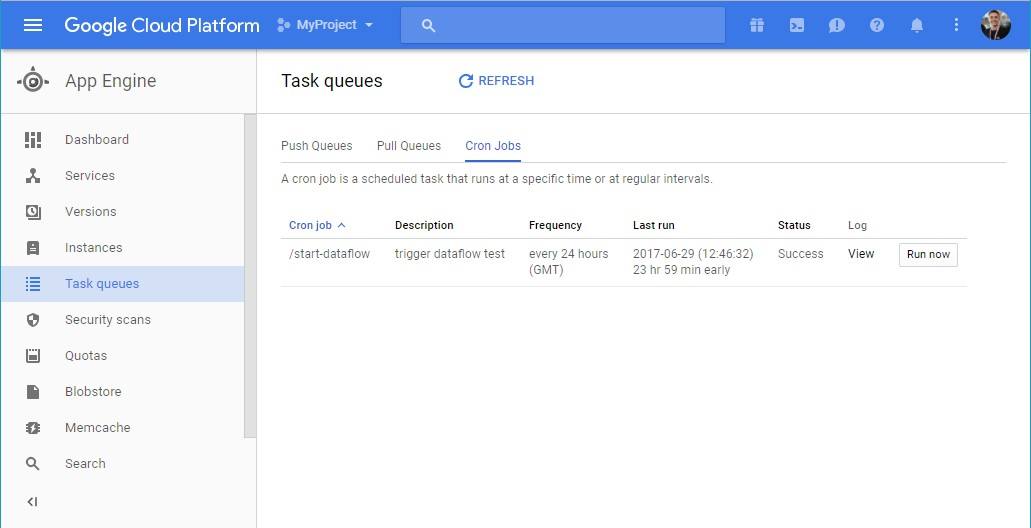 After successful job dispatch, you can open GCP Console and navigate to DataFlow tab to see all of your finished / running jobs:

For each job, you can view it’s exectuion statistics, logs and data flow visualization: